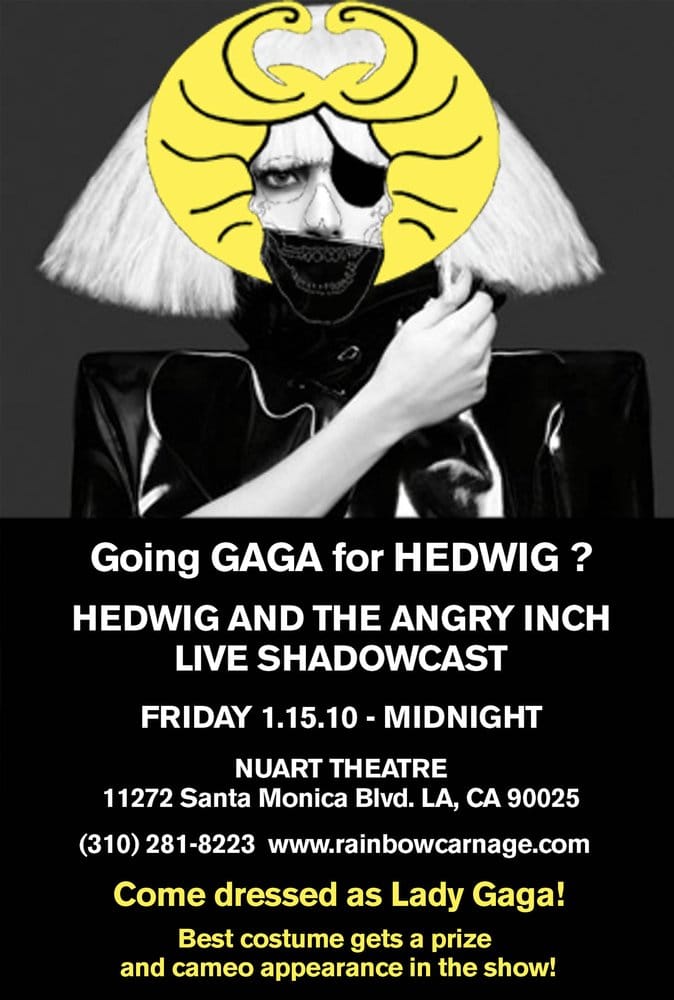 Some comments about Rainbow Carnage

Now this is one review that’s been sitting in my back burner for years, but since I’m still in recovery from their 10th birthday show, which was held last night, it’s time I finally whip this out.

Having spent some years in the Rocky Horror community, I’ve always found Hedwig refreshing. In the long run, it’s a better movie — great music, a deeper story, and more colorful characters — and I’ve loved it for years. Yep, I’m a Hed Head.

I first saw Rainbow Carnage nearly a decade ago, when Midnight Insanity, the Rocky Horror group I was associated with, still had their own Hedwig shadow cast, the Crypto Homo Rockers (and sadly CHR disbanded before I got the chance to see a show). They were doing a Kick Some Karaoke Ass theme night, with cast and audience members getting up to sing before the show. Even back then, I’d found Rainbow Carnage to be exciting, doing their film justice.

Unlike Rocky, where call-outs are usually made putting down the characters, props, set pieces, and songs in the movie, Rainbow Carnage reiterates before their performances, “We love our movie, and please respect it.” That’s not to say that people still don’t yell out their own jokes during the show and get a laugh from the crowd (I giggled like an idiot at the end when someone shouted, “Gentlemen, please, it’s after Labor Day.” Well, you had to be there). It’s thoroughly encouraged that you sing along with the movie, as well.

Also unlike the majority of Rocky shadow casts, due to the frequent costume changes in Hedwig, Rainbow Carnage uses multiple actors to play the roles. So you could see one person play Hedwig during “Tear Me Down,” a different person as Hedwig for “Origin of Love,” and then the first actor again for “Sugar Daddy.” For the record, the girl whom I always considered a kick-ass Yitzhak some years back is now a bad-ass Hedwig. She’s got the blocking down perfectly.

I just wish Rainbow Carnage held more shows throughout the year. I remember when they went down to performing quarterly and I was pretty bummed. Well, here’s to another 10 years for the longest running Hedwig cast in the world!

Now first off….If you are unfamiliar with the movie Hedwig and the Angry Inch, you are missing out on a fabulous piece of cinematic gold. It is cheesy and fun but coupled with a kick ass soundtrack and a great story of love/loss/sexuality/rock and roll.

In figuring out our Friday adn rejecting several plans, my cohorts and I decided on finding some cinematic goodness. Summer is the time for festivals and movie events so there should be many to choose from. Of course when we happened across Hedwig playing at the Nuart, we were sold (beating out such wonders as Labyrinth and Eternal Sunshine). Upon arrival we found, to our pleasure, that it was to be shadow cast….much in the style of Rocky Horror. Bonus.

The great thing about this was that, unlike RHPS, this was more a celebration of the movie rather than a mocking.There were a few people who yelled out amusing bits, and it was kind of a shame not more were known. There were actually quite a few people unfamiliar with the movie which resulted in softer sing-a-longs but i am sure they will all go and pick up the soundtrack and practice for the next time. Overall the cast did a great shadow job and I look forward to exposing more people to a fun cinematic adventure next time it comes around.

So I could just write a review of the Nuart, but I feel Rainbow Carnage is its own, fabulous, glittery animal.
Shauna D. was cool enough to post the Hedwig midnight movie on Yelp a couple weeks ago. At first I thought it was last Friday and I was so upset that I couldn’t go. Then, like Zeus with his lightening, the Fridays split and I was free!
Shauna and I met up for dinner way before the movie. After a little healthy overeating, we decided to get our tickets early. When we went to pay the guy selling tickets told us about a special deal. Two tickets for the show would come to $21, but for $4 more you could get a DVD of ‘Shortbus’ plus two comped tickets to the show. Shauna was sold and I get to borrow the DVD!
After getting some chai at a hipster cafe and pie at a diner where we met up with Chico, we headed back to the theater. It was about 11:45. We could see the line a block away. It didn’t look too bad, but we were glad we got our tickets beforehand. When we actually got to the theater we simultaneously realized that we underestimated the line. The line, as it turns out, goes down the alley next to the theater. A lovely alley that smells of urine. We later examined the wall and saw many a pee stain. Yuck.
At around 12:15 we were finally let in to the theater. It was entertaining to see some of the cast members mingle with the crowd while waiting in line. It was extra cool when someone offered Hedwig cookie samples to the line. Yet, all the line perks in the world couldn’t make waiting 15 minutes past the movie start time worth it.
By the time we got into the theater the there was slim seat picking. I went straight to the middle seats closer to the back while Shauna went to scout out better seats. Turns out I did the right thing and we all sat down. I sat down a little more than Chico or Shauna. All the chairs in the theater go back, and apparently, some of them go all the way forward as well. Exciting! Chico was nice enough to offer to sit in the seat. (Thanks Chic!)
After visiting the ladies room and getting settled I started watching the pre-show entertainment that was Guitar Hero. Yup. It was strangely mesmerizing….for a little while. By the time 12:30 rolled around I was ready for the show to start. BUT NO. Then there was a date auction with various cast members. The first couple auctions were entertaining, but a half hour later I was a little tired and just wanted to see the damn movie.
Finally, at 1:17am, the lights dimmed and the projector started rolling. Trailers. Really? REALLY? I appreciate the classic trailers, but save for the ‘Clue’ trailer, they were all for upcoming releases.
Just when I got to the point of contemplating just leaving, the movie started. For the next hour and a half the magic of Hedwig penetrated my soul. What is an amazing movie (my personal 3rd favorite of all time) was made even better with the Rainbow Carnage shadow cast. The costumes were spot on. The wigs were spot-on too. It was evident that the cast had seen Hedwig 100 times and really melded themselves with the movie on the screen.
Even though I didn’t get out of the theater until after 3am, I would go back in a heartbeat. Rainbow Carnage puts on a great show. Next time I’m bringing cash so I can get a Gnosis shirt. Actually, next time isn’t until January and I’ll be living in Portland, but I’ll have someone pick a shirt up for me.